History and Future of 360°VR 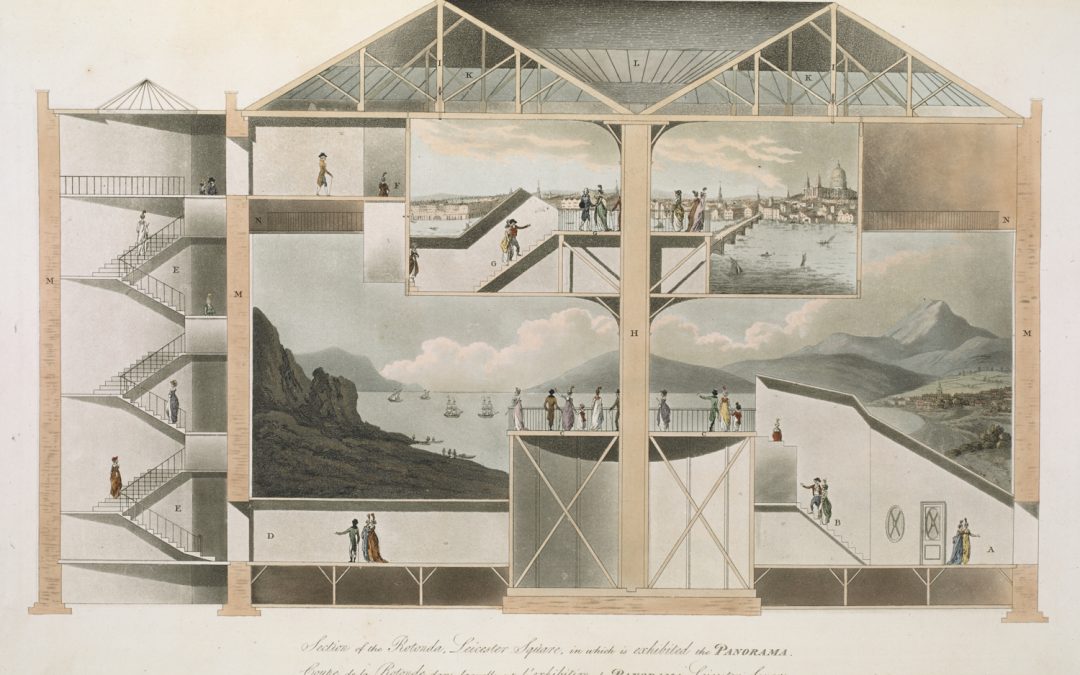 As technologies around 360° virtual reality (VR) continues to evolve at lightning speed with impressive innovations, let’s take a step back and appreciate where it all began. In this article, we will flash back to the history of panoramic images, understand where we are now and explore the possibilities of the future for 360°VR.

In Greek, pan means “all” and horama means “view”. The term panorama dates back to 1787 when English painter Robert Baker created his painting of the Rotunda building in Leicester Square in London, which was specifically built for the panorama. The painting consisted of a 360° landscape of the building. This was the first recorded moment where an art piece could virtually create a sense of being elsewhere without physically being there.

As it may be fascinating to look at panoramic paintings, spectators became more enlightened with the realistic advantages of photography. In 1843, Joseph Puchberger received a patent for a swing-lens panoramic camera that only produced 150° photographs. The first mass-produced 360° panoramic camera was the Al-Vista in America in 1898.

The term virtual reality was introduced by Jaron Lanier in the mid-1980s, when he started the invention of the goggles and gloves that which we correlate with VR today.

360° videos are also known as immersive videos or spherical videos. They are videos that can be recorded using an omnidirectional camera that takes pictures at every angle at the same time. A 360° video can also be created using multiple cameras, however, this would require the post-production edit of video stitching to acquire the full panoramic effect. It is usually formatted stereoscopically in order for viewers to see the images directed individually to each eye to create a 3D effect. These videos are designed for personal computers and mobile devices that bring the similar immersion as virtual reality, without the hefty headsets.

How are we implementing 360°VR in this day and age? Users are certainly compelled with the immersion aspect that technology can bring to the overall experience. Today, it is possible to virtually experience a far away place through a 360 video or panorama. This was unimaginable a century ago. Virtual reality transports users into unique dimensions.

Nowadays, 360°VR is present in many modes of media platforms. Users can find 360° videos on social media, such as Facebook and YouTube. These videos are being utilised in large organisations to incorporate a fresh and innovative perspective to their services, such as Google and the National Aeronautics and Space Administration (NASA).

One captivating aspect of 360°VR is its usage in the classrooms to improve the learning experience of students. This phenomenon has only been in rotation since the last decade. Educators are discovering that when students are provided with such rich, immersive media, they learn better and recall the information with higher success.

An example is the Visuon technology that provides an audiovisual 360° virtual reality content with Active Points for training and learning purposes. Imagine that you are the headmaster of a university laboratory with expensive equipment that cannot afford to be broken. Instead of practicing with these complex systems directly, using 360°VR can train the students to use them properly without the risk of breaking any device. The same can be related to the heavy machinery industry. Instead of putting employees’ safety at risk, the application of 360°VR training can decrease the chances of injuries, and still provide immersion in the exact location in which they would be working.

The ideas are endless when it comes to 360°VR technology. It is a versatile tool that can be used in many different realms. The educational sphere is certainly taking hold of the vast opportunity that lies in the implementation of VR technology for learning purposes. E-learning is moving at a fast pace to keep up with the way that students are obtaining information, usually through mobile devices.

In the filmmaking industry, producers are beginning to understand how to implement this technology into the overall process. As VR is still in its infancy, the same can be said about VR in filmmaking. The concept of livestream using 360° video has been tested, such as during the 2016 Olympics in Rio de Janeiro, Brazil.

VR in filmmaking still requires more research and practice before full implementation as a staple in video recordings. It is an exciting time for the growth of technology to progress at an accelerating rate, so let’s fully immerse and take advantage of this exciting moment.